My First Non-Kindle Tablet: The Nexus 7!

Despite working in the technology field for the past 15 years or so, I'm admittedly a slow adopter of new technology.  I love my tech toys, don't get me wrong, but you'll never catch me waiting in line at midnight at an Apple store (or any other retail outlet for that matter) forking over big coin to play beta tester just so I can say I had something first.

I've had my eye on Tablets for some time, but I refuse to be Glen, the guy from THE WEDDING SINGER, bringing home his $500.00 CD player simply because it was a shiny new toy he couldn't live without, even though he had no real use for it.  I don't NEED a tablet.  I have been content to sit back with my Kindle, my PC and my smart phone and watch everyone buy their $800 iPads, only to turn around and get pissed off when the new, improved model comes out a year later.

Well, I've waited long enough.  After much deliberation, I finally went out and bought my first Tablet this week...a Nexus 7! 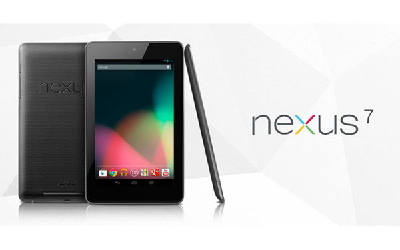 I've been reading about the Nexus 7 for quite a while now and I had high hopes for it.  I love my Android phone and the Samsung Galaxy Tabs were (and are) really nice, but as I said before, I just couldn't justify spending the money on a tablet.  That's why the deciding factor for me with the Nexus 7 was the price...just $249.00 for the 16 GB model.  Awesome!

I had a bit of trouble finding one.  It seems everyone and their brother went out and bought one when it was released.  I went from store to store for weeks trying to find it in stock, but every place was sold out.  It reminded me of the old days, before the Internet and eBay of hunting from store to store for certain comic books or toys from a wave of action figures.  It was both exciting and frustrating!

Finally I happened to go to Microcenter and the manager suggested I check the website on Monday, Wednesday and Friday for inventory and then do a store pickup option.  I checked Monday and there was nothing, but Wednesday I hit the jackpot!  By Wednesday afternoon, the Nexus 7 was mine!

So far, I love it.  The display is beautiful.  It's fast and responsive.  It has great battery life.  It doesn't run too hot.  It's sturdy and not cheaply constructed.  As with all Android devices, it has tons of cool apps and games available for it.  AND, it came with $25.00 in Google Play money to buy new premium content!  What's not to love?


It's great, but don't get me wrong...it's not perfect.  I started writing this post using the Android BLOGGER app, but I was getting frustrated with their picture integration, so I decided to finish the post on my PC.  Now that I'm an early adopter of the Nexus 7, I have no doubt the Nexus 7 2.0 will feature a better Blogger app to go along with more memory, a rear facing camera, more storage and an SD Card slot.

Unlike the $800.00 iPad, though, if a newer, better Nexus 7 comes out in a year, I'll actually be able to afford an upgrade.

I'm hoping to use it to get organized at work.  There seem to be a ton of productivity apps, so I've been testing them out, looking for the best ones.  If you have any suggestions for great apps, productivity or otherwise, please e-mail me or post them in the comments!
Share |
Posted by Kenn Hoekstra at 5:20 PM 2 comments