It occurred to me recently that it was 20 years ago I started working at Raven Software. 20 years ago today, actually: February 3rd, 1997. Working there and the events that unfolded during my time there completely changed my life. Interested in a little trip down memory lane? As the Gilligan's Island theme song goes, "Just sit right back and you'll hear a tale..."

I was working as a restaurant manager at my Alma Mater - The University of Wisconsin - Whitewater in 1996. I hired a guy by the name of Jeff to work part time in the kitchen while he was finishing up his Master's Degree. Through him I met his brother Eric who was a level designer at Raven Software (and he still works there). We hit it off and he told me they were hiring designers and that they were willing to train creative types to do the work. Level design sounded way more interesting to me than restaurant management, so of course I jumped at the chance.

I asked how I should dress for the interview. Should I wear a tie? Business casual? I was told that I would be laughed at and tossed out of the office if I showed up dressed like that. I think I wound up wearing a Green Lantern t-shirt and a backwards baseball cap. The interview was me sitting with a group of other designers answering questions about my favorite movies and TV shows, comics, RPGs, board games and whatnot. It was very casual. They were cool guys. Afterward I went to my eventual boss's office and watched him work for a while and he asked "Do you think you can do this?" I said "Sure. When can I start?" He said I could start in two weeks. Yeah!

Even though it was a salaried position, it was truly entry level. I actually took a pay cut from the big *cough* bank ($22,000 per year) I was making at the restaurant job to take the gig. Raven was still independent then. It was pre-Activision acquisition (though Activision was in the process of publishing Hexen II) so things were running very lean. You had to make games quickly and pretty much every game had to be a hit or you were out of business. It was hard work. Long hours. But I loved every minute of it.

Taking this job was a huge risk for me. Not only was I taking a pay cut, I was relying on myself to learn and do a job I'd never done before that had nothing to do with restaurants or my English Degree. If I failed, I would be out on the street. It was a big leap of faith.

I grew up in a town of less than 1500 people before moving to a farm in the boonies. When I went to school in Whitewater, that was a city of maybe 10,000 people. I was living in Fort Atkinson and that, too, was a tiny town. The idea of working in "the big city" of Madison scared the shit out of me. I had to drive an hour each way every day and driving on the beltline in the mornings was terrifying. But I did it. I even moved to Madison a year later. I laugh about it now, but this was a a huge step for me. The first of many huge steps. Luckily I had the newly reformatted 94.1 WJJO morning show to keep me sane on the morning commute. Happy 20th anniversary to you, too, Johnny and Greg! 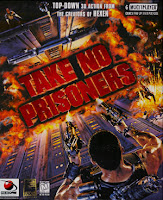 My first title was Take No Prisoners. Raven was working on that, the aforementioned Hexen II and a third title called MageSlayer. Three PC games. Three different publishers. Less than 30 employees. It really was a different era. My first workstation was a Pentium Pro 200 with 128MB of RAM running Windows NT 4.0. My only previous Windows experience was with 3.1. I had to learn 3-D Studio Max. I'd never seen or touched 3-D design software in my life. It was a steep learning curve, but I did okay. I definitely put in my share of extra hours. I was 23 years old and single and I was used to working 60 or more hours a week at the restaurant, so living at the office was natural for me.

Take No Prisoners was originally called Riot. The only problem? Halfway through development, Monolith announced that they were working on a game called Riot. (Interestingly enough, Monolith's Riot would later become SHOGO: Mobile Armor Division so what follows was pretty much for naught).

We had to come up with a new name. We all brainstormed and we sent the publisher tons of name suggestions. They wanted to call it Outrage. The project lead thought that sounded like a 3 year old having a tantrum at a K-Mart, though, so it didn't really fly. There was a lot of back and forth and Take No Prisoners eventually emerged and somehow the name stuck. We didn't come up with it. We weren't really huge fans of the name, but we felt it was better than Outrage. I liked it, though, because I was (and still am) a big fan of the Megadeth song of the same name.

Toward the end of Take No Prisoners' development in 1997, 3dfx released their new Voodoo 3-D Accelerator card. The Voodoo Rush, maybe? I remember walking across the field behind Raven to go to Best Buy with another designer (Hi Jon!) to buy a couple of them and bring them back to test. They were pretty badass at the time. At least until nVidia came along a short while later and blew everyone away with their TNT, TNT2 and GeForce cards.

Anyway, the programming team that was working on the Vampire Engine (which powered Take No Prisoners and MageSlayer) wanted to take advantage of the colored lighting that could be done using these new 3-D cards. They put in support for the technology, but the team was on a tight deadline to finish up the maps so we didn't think we would have time to touch them all to add it. At this point I went off the reservation and decided I would try to do it all myself. I lived at the office for two days and slept under my desk so I could try to get it all done. By the time anyone realized what I was doing, I was more than half way there so we decided to finish the job...because we really had no choice. 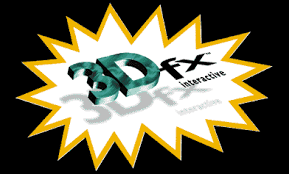 Looking back, I'm honestly surprised this little stunt didn't get me fired. I imagine I have my original boss, MRJ, to thank for shielding me from that shit storm. We got it in. We got it done. It was pretty rad. That game really did come together at the last minute. The engine technology was in development the whole time we were working, so it was only at the end that things really started working the way they were intended. We got multiplayer in in the last few months and we even supported a half dozen (or more) custom game types. I put my blood, sweat and tears into Take No Prisoners (as did everyone on the team) and the day it released I couldn't have been prouder.

It bombed. I was heartbroken.

No one really knew how to market the game. Raven was known for first person shooters, so the whole top down perspective was making people scratch their heads. The view was adjusted to make it more 3rd person than top down, but that didn't help, either. To make matters worse, Activision was in the process of acquiring Raven, so I get the impression that the publishers of both Take No Prisoners and MageSlayer had little interest in these games making a ton of money that would only end up lining Activision's pockets. I believe they tried to cut their losses at that point and just put the games out there to see what they would do. Unfortunately, they didn't do much.

Hexen II was a moderate success, though. Activision was happy. The acquisition went through and we started work on the Hexen II Expansion Pack - Portal of Praevus. That was a lot of fun. It was my 2nd project. I had to learn the Quake tools and our modified QuakeEd editor. I did it. I learned a lot. My career as a game developer was off and running.

In the years that followed, my time at Raven coincided with some of the biggest events in my life. These events included, but were not limited to:


Outside of game development, my time at Raven taught me how to manage, support and promote projects -- skills that served me well years later when I was a Producer at Pi Studios. I also learned desktop support, customer support, and a variety of Information Technology skills which would eventually allow me to transition out of game development and back into IT when Pi Studios closed in 2011. 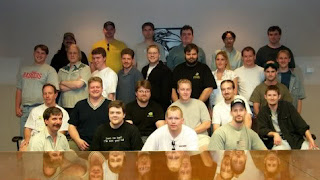 I worked with some really talented people and made a lot of lifelong friends...many of whom still work at Raven today! I loved working with all of those friends (and going to their weddings). I loved the work itself. Most of all, I loved promoting our projects in the gaming press. It gave me great satisfaction to help get so many eyes on all the fantastic work everyone was doing. It was never about me. I never wanted to be (or tried to become) a rock star. I just wanted our work to be seen and wanted our games to succeed. I took pride in that back then, and I still do to this day.

Thank you Brian and Steve and MRJ and Mike and Eric and all of the rest of the 100+ Ravenites I had the pleasure of meeting and working with over the years. It was a great opportunity and it shaped the person I am today in so many ways. I hope you remember me as fondly as I remember all of you.  :)

On a final note, I was sad to hear that Charlie Bernstein, the fine gentleman who replaced me as Raven's IT Administrator when I left, was recently in a major car accident. I'm very proud of the way the Raven family (and everyone else) from around the world is banding together to help support Charlie during this terrible tragedy. "Charlie's Army" has raised $65,000 so far, but there's a lot more work to do. If you can, I encourage you to make a donation to support one heck of a great guy. 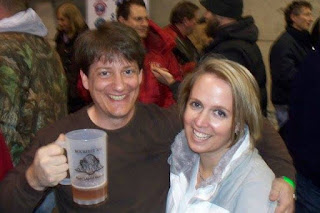 Thanks for reading.
Share |
Posted by Kenn Hoekstra at 9:32 AM 1 comments