The 10 Greatest Cereals Of All Time! For The Glory of Quisp!

I was listening to the radio on the way to work today and Johnny Danger from 94.1 WJJO was talking about a survey that voted for the greatest cereals of all time.  He starts out with LIFE at #97 and works his way up through APPLE JACKS at #40 and FROOT LOOPS at #38.  Then he starts talking about the Monster Cereals at #30, #27 and #17.  He rattles off a chunk of the Top 10 and then says "Guess what Number 1 is?" 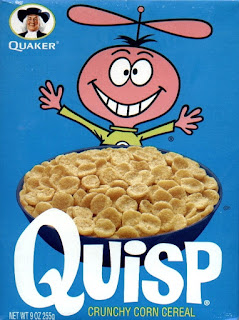 I pump my fist and yell "YEAHHHHHHHH!!!!" at my radio when he says "QUISP!"  The greatest cereal of all time...OF ALL TIME!  Man, I loved that stuff.  My dad and my stepmother used to buy it for my brother and when we visited them on the weekends as kids and I'm pretty sure we killed an entire box, at least, every week.  It was so amazingly badass.  It's like CAP'N CRUNCH without the total roof of your mouth destruction that comes with it.

So, it's a good list.  A "Tremendous" list, if you listen to Donald Trump. They got #1 right at least.  It got me thinking about my favorite cereals.  After much deliberation (and countless thousands of boxes of cereal consumed in my youth), here they are...the Top 10 Cereals of All Time!

My profound apologies to TRIX , APPLE JACKS, LUCKY CHARMS, GRAPE NUTS and HONEY BUNCHES OF OATS, which all narrowly missed my list.

#10 - FRANKENBERRY - No disrespect to COUNT CHOCULA or BOO BERRY (or even YUMMY MUMMY), but this is my favorite Monster Cereal. I love drinking the strawberry milk from the bowl at the end!

#9 - SUPER SUGAR CRISP/SUPER GOLDEN CRISP - I guess at some point it became politically incorrect to call out a cereal for what it is: pure sugar.  That's when the name changed to SUPER GOLDEN CRISP.  A shout out here to SUGAR SMACKS, which are essentially the same thing.  I "Dig 'Em!"

#8 - C3POs - C3PO is not my favorite STAR WARS character.  Not by a mile.  In fact, he kinda sucks.  Regardless, I have fond memories of eating these in the 1980's at my friend John's house.  We loved them.  Many boxes destroyed on the weekends.  I wish they still made this stuff...

#7 - COOKIE CRISP - Yum.  I could eat a box of these in one sitting, I swear. They've had a ton of mascots over the years.  Check this out:

#6 - CINNAMON TOAST CRUNCH - Sugar overload!  Delicious.  Ditto eating a whole box in one sitting.  This stuff is ridiculous.  God damn it!  I have the commercial jingle in my head now!

#5 - HONEY NUT CHEERIOS - Classic.  My son loves it.  My wife loves it.  Good luck keeping a box in the house for very long.  I could do without the mascot, though.  I hate bees.

#4 - GOLDEN GRAHAMS - Yummmmmmm!  I love me some GOLDEN GRAHAMS.  There's a fine timing involved in eating these where the milk has started to soak in, but the grahams haven't gotten soggy yet.  It's an art, really.

#3 - CRACKLIN' OAT BRAN - How the hell did this cereal not even chart on that Top 100 list?  Sure, it looks and sounds like Old People Cereal(TM), but it's not.  It's fantastic!  I'm craving some now.  I might have to go buy some over lunch.

#2 - CAP'N CRUNCH PEANUT BUTTER - The classic.  The standby.  Probably the cereal I had most often growing up.  We always had a box in the house, it seemed.  I think my mom must have stopped and bought a box every night after work before coming home.  She was the greatest.  LOVE YOU, MOM!

P.S. The balloon racer on this box was amazeballs!

#1 - QUISP - I own a QUISP wrist watch.  I'm not even joking.  This stuff is the bomb.  I'm happy to say that even though the cereal was discontinued in the late 70's or early 80's, they still sell this stuff online at Amazon.com! 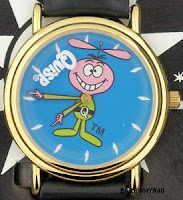 I think it may be time to introduce my son to the glory...

Yes, kiddies, much like my old pal SINISTAR, I LIVE!  Gosh, it's been forever since I updated this Blog.  Where do I start?

My "Only Watch Movies I Haven't Seen" Challenge from 2015 was mostly a success.  I think I made it to September before I realized I was punishing myself more than I was doing something worthwhile.  On the bright side, I did watch a ton of new things and it was an interesting learning experience.

I got a new job.  I moved back to Wisconsin from Texas.  I survived my first Winter back in The Frozen Tundra.  The 2nd Winter is imminent.  That's how long it's been...

I haven't been writing much, but that's about to change.  I took a side gig writing for PopHorror.com!

It's only been a few weeks, but it has given me a chance to flex the old (atrophied) writing muscles again!  The articles I've published for them so far include:


Yes, so far I'm getting a reputation as "The Birthday Guy," but don't worry.  I have a bunch of cool ideas for articles and features that I'll be writing over the next few months.  Check back soon!