I outlined several goals for myself in 2012 in my first blog post of the year. How are they coming along, you ask? Not too shabby, I guess, but there's still room for improvement.

So far I've:
And finally, I wrote a new article for Pocket Doppler: The 10 Most Heartbreaking Playoff Losses In Green Bay Packers History!

The article was inspired by the 37-20 beatdown the Packers suffered at the hands of the New York Giants this past Sunday. The loss came in at Number 5 on my list. Of the ten games, I've actually personally witnessed 8 of them. Lots of heartbreak in Packer land over the years... Head on over to Pocket Doppler and give it a read!

One other goal I've decided to add to my resolutions is to take better care of my teeth. I had a dental exam and I need to have a bunch of fillings. I brush twice a day, but I need to use an electric brush and I need to force myself to floss. I've been flossing at least every other day since my appointment. That's better than I was, but still not good enough.

Words With Friends = Rage Against Friends

Zynga's WORDS WITH FRIENDS has become a cultural phenomenon in the past few years. It's got millions of users and fans and it even got Alec Baldwin kicked off of an airplane. It's basically electronic Scrabble. You can play up to 20 games simultaneously with your friends on Facebook or on your smart phone. Sounds awesome, right?

Why, you ask? I have an English degree with an emphasis in writing and I've been a writer my entire life. I have a vocabulary that's larger than most. I love to read every day and my spelling abilities are far above average. So why can't I win when I play this stupid game? I've been trying to figure it out.

When I play WORDS WITH FRIENDS, I try to make the biggest words I can with the letters I have. I generally start out the games pretty well, but inevitably my opponent kills my six, seven and eight word masterpieces with a bullshit word like "Qi" played on a triple word or triple letter score.

Do you know what Qi means? Of course you don't. No one does. It's a variant of the word "Chi," as in Chinese energy. I'm telling you, no one knows that. But the game does. And so does every WORDS WITH FRIENDS player who's had it dropped on them. It also allows other B.S. two letter words like "El," and "En," and "Lo," and "Et."

Why does that matter?

I've learned that to keep games competitive with these "I'll just try the letters until something works" players, you have to strategically try to keep the game in the center of the board as long as possible and away from the Triple Word Scores. But what fun is that?

It's only a matter of time before the punk you're playing gets a break with a two or three letter word no one's ever heard of that allows him to make a big Triple Word. I've won about 30% of the games I've played, lost 30% and rage quit about 40%. I've decided it's just not worth it anymore.

The final straw? I was playing a friend of mine from college. He had a 30 point lead on me in the middle of the game, but left me an opening. I played "JIVE" on a Triple Word and Triple Letter score for 97 points and felt so guilty about what a bitch move it was, I wanted to kick my own ass.

I haven't seen him online since. I get the feeling if I ever see him in person, he's going to punch me in the face.

I think that's enough WORDS WITH FRIENDS for me, thanks.
Share |
Posted by Kenn Hoekstra at 3:58 PM 6 comments

It's hard to believe it's 2012 already. With the exception of my wedding in August (which was amazing!) and the Packers winning the Super Bowl (hooray!), 2011 was a complete and utter waste of time for me. Let's not kid ourselves...it was a Goddamned horror show.

Pi Studios imploded back in February and I've been out of work and looking (with very little success) ever since. Money has been a problem. The housing market in Houston tanked big time. I had unemployment issues. I failed to start a business. The Badgers lost the Rose Bowl. Yes, 2011 was truly an awful year in every sense of the word. Good riddance.

I guess there was one other bright spot: I still have my health (*knock on wood*). I managed to lose 20 lbs over the course of the year. Back in January, I was sitting at an all time high of 252 lbs, but as of this morning I was down to 232. It's still a long way to go to get to my goal weight of 210, but I'm hoping to do that this year. 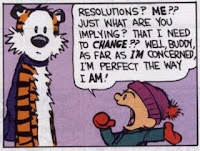 That brings me to the point of this blog, actually. Goals. Resolutions, if you will. I have big plans for 2012 and even though you probably don't care much, I thought I would share them with you anyway. So here goes...

My 2012 New Year's resolutions!
There are probably other things I should be doing, but I think this is a good start. I really do have high hopes for 2012 and I hope you do, too! Cheers to bigger and better things for all of us in the New Year!