The weekend box office chart 35 years ago was pretty amazing. You had Blade Runner, John Carpenter's The Thing, and MegaForce debuting on a weekend when E.T., Poltergeist, Rocky III, Star Trek II: The Wrath of Khan, and Conan The Barbarian were already out in theaters. I mean look at this! Amazing! 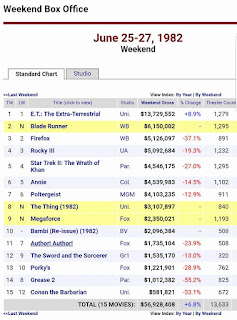 I was too young to see John Carpenter's THE THING in theaters, but I saw it on HBO not long after. What a life changer. It's my favorite horror film of all time. It may even be my favorite movie of all time. It's so good. I took the opportunity to write about it for PopHorror. Check out my 35th anniversary retrospective of The Thing right here. 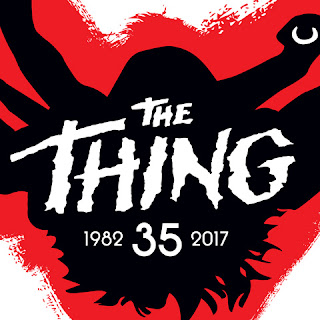 I watched it over the weekend. It still holds up. I'm looking forward to the next 35 years!

I've written quite a few articles for PopHorror over the past few months. If you're bored and want to check them out, you can do so here.